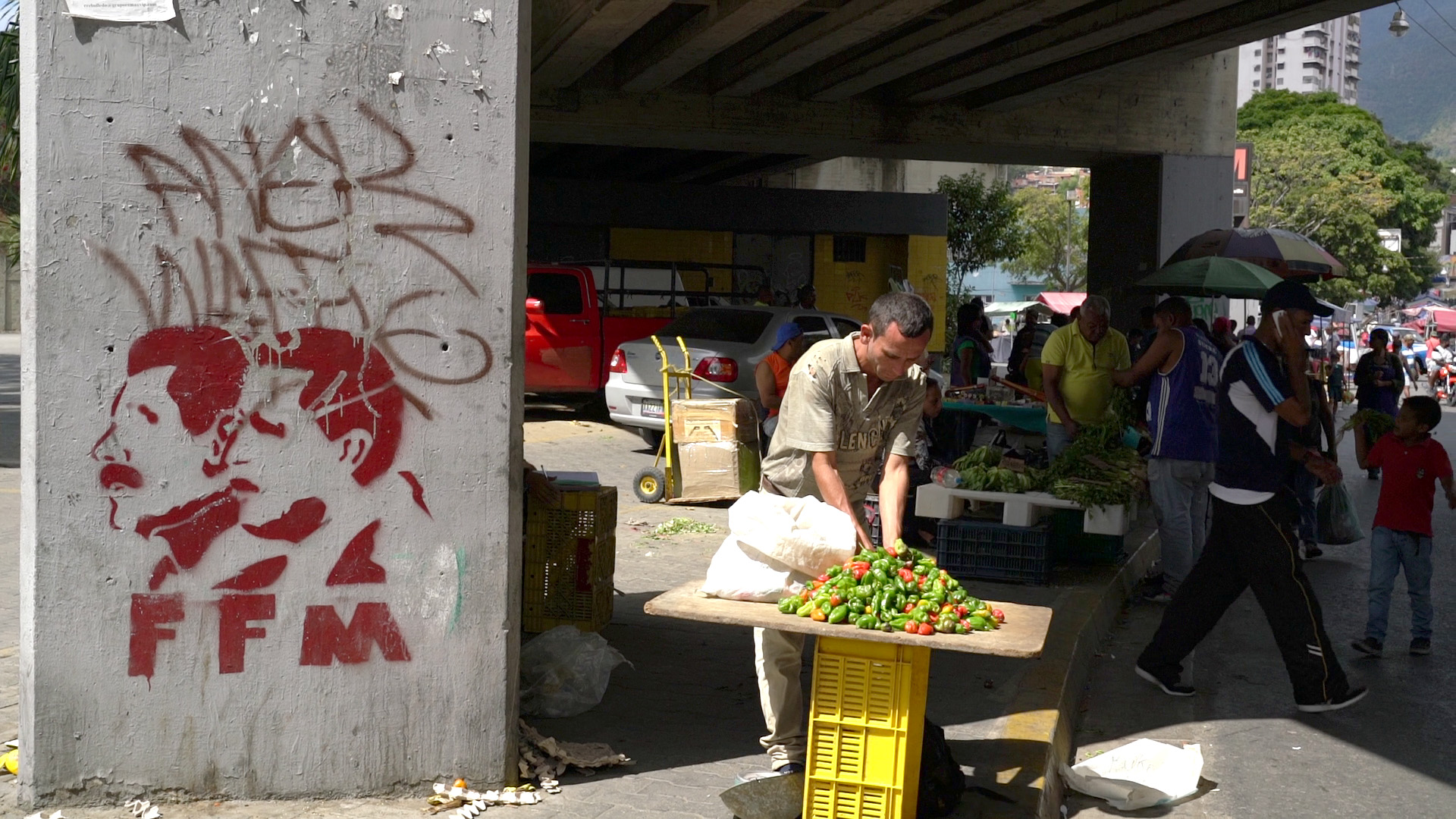 A market in Venezuela (Credit: The Grayzone's Ben Norton)

US sanctions against Venezuela are like “going into microsurgery with a kitchen knife” and are holding an entire population hostage, the UN special rapporteur on the negative impact of unilateral coercive measures told The Grayzone.

“I have reviewed sanctions across the world. Very few of them have really been a positive, helpful factor. It’s like going into microsurgery using a kitchen knife. It’s a very blunt tool to achieve the proclaimed objective,” said ambassador Idriss Jazairy in an interview with The Grayzone.

“They usually contribute, and this is the case now in Venezuela, in stimulating more suffering for innocent people that have no axe to grind in the political dissent that exists in the country,” he added.

Jazairy, who monitors sanctions for the UN, joins the first UN official to visit Venezuela for 21 years, Alfred de Zayas, in firmly condemning the measures which both men say are killing Venezuelan citizens.

The special expert called it “bizarre” that, at a time when Venezuela lacks food and medicine, the US and its allies have intervened to restrict access to both critical needs by imposing crushing new sanctions.

Jazairy made his comments just before the UN Human Rights Council approved a resolution by Venezuela on March 21, by a vote of 27 to 15, condemning the use of unilateral coercive measures like sanctions.

The resolution declared that the Human Rights Council was alarmed at “the disproportionate and indiscriminate human costs of unilateral sanctions and their negative effects on the civilian population, in particular women and children, of targeted States.” It urged states to abide by international law and remove illegal sanctions.

“If you block all their financial resources, how would they be fed?”

Jazairy is most critical of measures imposed by the United States against PDVSA on January 28, which bar American individuals and companies from making transactions with the state owned oil giant, and blocks its interests and property in the US. He said the measures are causing starvation.

Venezuela is heavily dependent on foreign imports of food and medicine which it often pays for through oil sales. These generate around 98 percent of the nations export earnings according to OPEC. By imposing sanctions on PDVSA, the largest company in Venezuela’s oil sector you’re starving the country, Jazairy said.

“If you block all their financial resources, how would they be fed? They’re already in a bad situation. Five million have left the country because they can’t find subsistence and now you’re going to make it worse by imposing these sanctions. As I say, it’s playing with fire,” he said.

He called it a “mad world” when the US “starves” people through sanctions and threatens force if US humanitarian aid is not allowed to be delivered.

“Would it not have made more sense to let the people survive in the first place rather than weaponizing humanitarianism after starving them to trigger civil war?” he said.

Since backing Juan Guaidó’s coup attempt against current President Nicolas Maduro, the US, EU, Canada and the UK have all imposed sanctions against Venezuela which are illegal under international law.

The UN official predicted a “terrible” situation around the corner and the possibility of “tremendous” violence if leaders don’t change course.

The US Treasury has not responded to a request for comment on Mr Jaziary’s allegations.

On 28 January US secretary of state Mike Pompeo defended the measures implemented against PDVSA. He said: “These new sanctions do not target the innocent people of Venezuela and will not prohibit humanitarian assistance including the provision of medicine and medical devices, which are desperately needed after years of economic destruction under Maduro’s rule.”

“The United States will continue to take concrete and forceful action against those who oppose the peaceful restoration of democracy in Venezuela.”

In a statement to the Human Rights Council on March 20, she condemned the “dramatically” deteriorating economic and social rights in the country and highlighted reported abuses and alleged killings by pro-government security forces which she said her office is investigating.

The next day, National Security Adviser John Bolton warned that the toughest sanctions were yet to come, writing on Twitter: “Unless Maduro’s usurpation ends, he and his cronies will be strangled financially. The window is closing.”

Erich Ferrari, a lawyer and founder of a Washington DC-based law firm specializing in US economic sanctions, told The Grayzone that an idea has developed in Washington among some decision makers that the US can get whatever it wants by applying sanctions.

Ferrari believes the US has moved from using sanctions as a tool to achieve focused policy objectives to making them a strategy in their own right replacing military intervention.

“Sanctions used to be a tool to gain leverage as part of a boarder diplomatic strategy. Now sanctions are the strategy,” he said. “I think they view it as: ‘We have a larger political problem with Venezuela, these are some of the bad things Venezuela are doing to justify our sanctions.’”

“The American appetite for military intervention has thankfully gone down and this is seen as replacement to that. It’s still violence. It’s not physical violence, it’s economic violence that we’re perpetrating against others who we believe to be acting contrary to our interests.”

Ferrari said sanctions are easier to sell to the US public because few people understand them, and soldiers don’t need to be sent to fight when the US financial system and the dollar can be leveraged instead.

Jazairy has appealed to the United States for the sanctions to be lifted and for Venezuelans to be allowed to resolve the crisis internally, he told The Grayzone.

The UN special rapporteur successfully helped negotiate an end to US economic sanctions against Sudan on October 6, 2017. He applauded the United States for that decision and called on leaders to take similar action again with Venezuela.

“This is a recognition by the United Nations, that those sanctions that are not approved by the Security Council have an adverse impact,” he said.

The UN official called for the effects of the sanctions to be closely monitored in the meantime, so they can be quickly reversed if the situation in Venezuela starts “exploding.”

When lives are threatened by food and medicine shortages, the difference between life and death can be a matter of hours and days rather then months, he said.

We [special rapporteurs] are all independent,” Jazairy continued. “We don’t have an axe to grind in politics, and we just think of defending the people.”

“International humanitarian law says that it’s a crime to take a population hostage. Why are these people taken hostage? Solve the problem between political leaders, but don’t take innocent individuals as pawns in this political game that’s going on in Venezuela.”