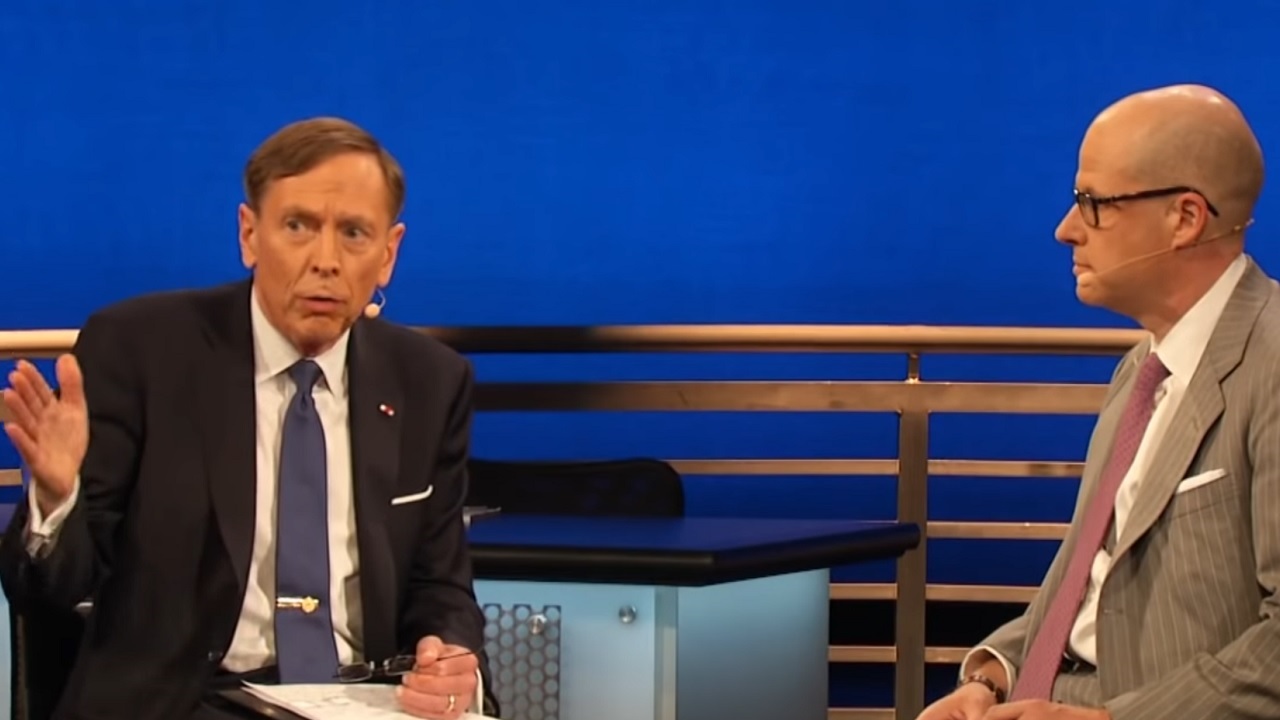 Former CIA director David Petraeus says there has been much “more continuity than change” between the Trump and Obama administrations, an in interview with Max Boot on September 13, 2017 in New York City (Photo credit: Intelligence Squared / YouTube)

Washington’s warmongers warm up to Trump: Ex-CIA director Petraeus says he is ‘more continuity than change’

Former CIA director General David Petraeus doesn’t see much difference between the Trump and Obama administrations, saying there is “more continuity than change.”

In an interview with hawkish pundit Max Boot, former CIA director David Petraeus stated in no uncertain terms that President Donald Trump’s militaristic foreign policy does not represent a significant departure from that of previous administrations, and is already quickly moving “back to the norm.”

Trump’s hardcore supporters have claimed he has been resisting the U.S. “deep state” — that is to say, the key elements of the military and national security establishment that remain the same from administration to administration. Yet just eight months into his presidency, one of the most influential faces and voices of the deep state has revealed precisely the opposite: Trump’s warmongering foreign policy is largely an intensification of the status quo, not a break from it.

Petraeus repeatedly stressed in an interview on September 13 that there has been much “more continuity than change” between the Trump and Obama administrations on matters of war and peace.

The influential four-star general went on to praise Trump’s April missile attack on the Syrian government, and also approved of the president’s decision to expand the war in Afghanistan. He even spoke highly of Trump’s escalation of the so-called war on terror, claiming it “has been quite good, frankly, on the ISIS and anti-extremist endeavor.”

Petraeus made these remarks in a discussion with the neoconservative pundit Max Boot. Their 30-minute interview was the keynote of the event “Unresolved: Face-Off with China,” which AlterNet’s Grayzone Project attended at New York University. (Video of the interview is embedded below.)

Their discussion, hosted by the organization Intelligence Squared U.S., was followed by a debate concerning U.S. policy toward China and the rise of China as an economic and political superpower.

Putting the generals in charge

Donald Trump has surrounded himself with generals, essentially handing over his foreign policy to them and to the Pentagon.

Though he campaigned on an “America First” agenda, portraying himself (albeit inconsistently) as a non-interventionist and a skeptic of maintaining a strong U.S. military presence abroad, Trump has willingly given the notoriously belligerent Secretary of Defense James Mattis unprecedented authority to set troop levels and launch airstrikes across the globe.

Mattis once confessed about his time battling Taliban insurgents in Afghanistan, “It’s quite fun to shoot them, you know. It’s a hell of a hoot. It’s fun to shoot some people.” He also told soldiers in Iraq, “Be polite, be professional, but have a plan to kill everybody you meet.”

Trump won rare praise from neoconservatives and liberal interventionists alike when he appointed Gen. H.R. McMaster, a key figure in coordinating the U.S. surge in Iraq’s Anbar Province, as his national security adviser. He further reassured the Beltway foreign policy establishment by installing as his chief of staff John Kelly, another general who previously led the U.S. Southern Command.

David Petraeus, who worked with figures like McMaster during his time in the U.S. military, headed the CIA under President Barack Obama, until a scandal led him to resign. Before that, the general led U.S. forces in the wars in Iraq and Afghanistan.

This coterie of warmakers has largely warmed to Trump, and particularly to his bellicose foreign policy.

Max Boot is a staunch defender of what he openly recognizes as American imperialism. He opened his interview with Petraeus at NYU by lavishing praise on the general, calling him “one of the people I admire most in the world.”

Boot and Petraeus have a long history; when General Petraeus led the U.S. war in Afghanistan, he worked closely with civilian analysts from neoconservative think tanks, including Council on Foreign Relations senior fellow Max Boot.

In 2012, the Washington Post exposed how Petraeus had personally invited Boot to Afghanistan for several weeks. He was joined by fellow war hawks Fred Kagan and Kimberly Kagan, of the right-wing American Enterprise Institute and Institute for the Study of War, respectively.

Together, these think tankers worked as “de facto senior advisers” for the powerful general overseeing the U.S. war in Afghanistan, the Post noted.

Petraeus opened the discussion by saying of Trump’s foreign policy, “I would contend that you would characterize this more as continuity than change.”

“You can go down issue after issue — NATO, whatever — critical at times during the campaign, not unlike some other candidates in some other campaigns, but perhaps a bit more so here. But ultimately, coming back to the norm,” Petraeus added.

The former CIA director went on to explain that Trump has gradually embraced the hyper-militaristic status quo:

“You have McMaster and Cohn writing op-eds, saying that the U.S. will continue to lead. You have advisors all around him who very much are continued — committed to continue to lead. And so, we’ll have to see, again, how this does evolve. The president, I think, has shown a commendable willingness to acknowledge that he was unfavorable towards certain recommendations. But ultimately, over time — as most recently with the Afghanistan policy — I think has been quite good, frankly, on the ISIS and anti-extremist endeavor.”

Petraeus likewise commended the Trump administration for attacking the Syrian government in April, after accusing it of using chemical weapons. “There’s no ambivalence there: 36 hours later, 50 cruise missiles hit the air base from which those were launched,” the general said.

“If you tick down all of the different issues, probably more continuity than change,” Petraeus reiterated.

Boot pressed Petraeus on Trump’s “unusual behavior” — his strange tweets and vicious attacks on the media, and his refusal to condemn neo-fascists and white supremacists. Petraeus downplayed Trump’s extremism, which he compared to the “madmen strategy” employed by former U.S. president Richard Nixon.

The influential deep state figure went on to speak positively of Trump. “This is a president who truly actually believes in doing what he wrote in his book about doing, which is before you negotiate with somebody else, you punch the other guy in the nose before you even sit down,” he said. “And you seize value in, in some cases, the lack of consistency who wants the other side off balance.”

President Trump and fellow members of his administration have repeatedly threatened North Korea with genocidal destruction.

Petraeus approved of the Trump administration’s belligerent posturing on North Korea. “I think it’s valid for the administration to look at this differently than any other administration,” he said in the NYU interview, calling Kim Jung-un a “madman.”

He likewise defended the imposition of harsh sanctions on North Korea, a country of 25 million people, arguing that in some contexts, “Sanctions do work.”

But the general complimented Trump for his global outreach. “He has been very assiduous in reaching out — he loves working the phones,” Petraeus said. “And there’s some merit in that. If you’re the president of the United States and you’re willing to call a lot of these different leaders around the world — I can tell you I’ve seen different situations.”

Boot concluded the interview with a jab at the Iran nuclear deal. The think tanker also mentioned that, a few weeks before, he had taken a trip where he landed on the U.S. warship USS Nimitz in the Persian Gulf.

John Donvan, who moderated the event, described Boot as “a good friend of Intelligence Squared U.S.”

Watch the full interview, and subsequent debate, below: