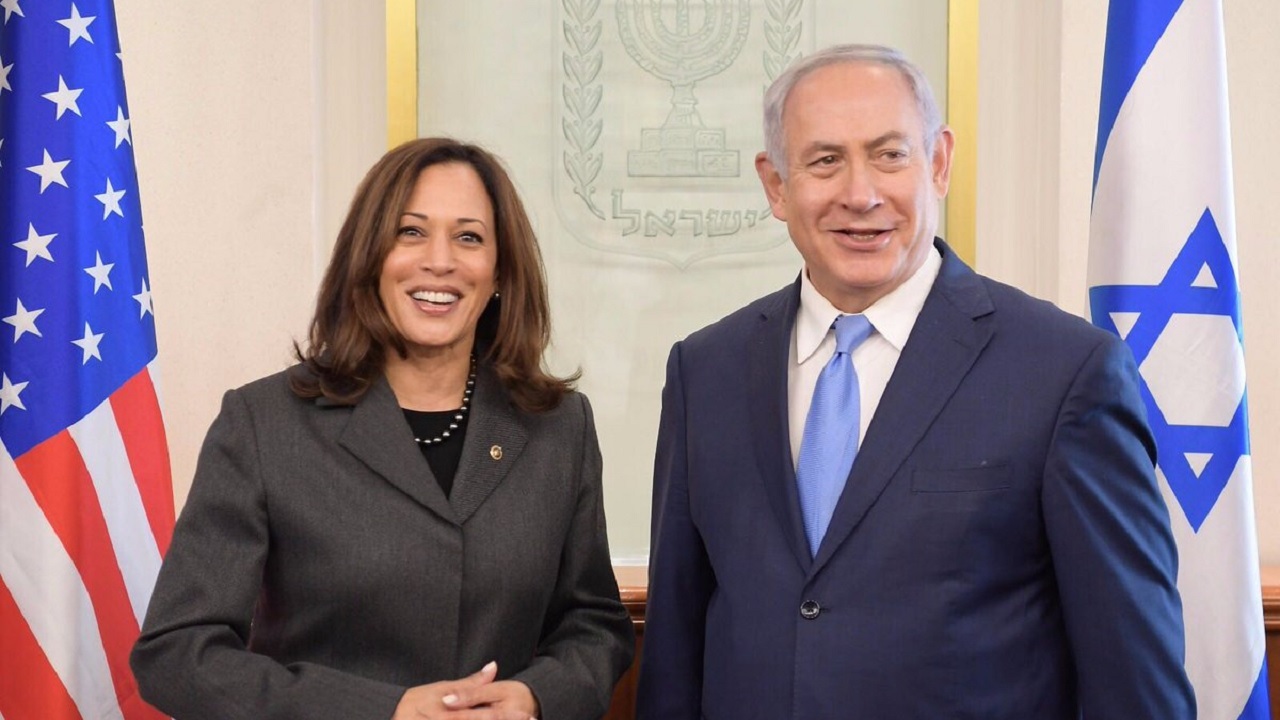 A friendly meeting California senator and self-declared “top cop” Kamala Harris held with Israel’s right-wing Prime Minister Benjamin Netanyahu shows she is more than willing to throw anti-racism — and Palestinians — under the bus.

(Editor’s note: Democratic presidential candidate Joe Biden selected Kamala Harris as his running mate on August 11, 2020, in a move immediately celebrated by Wall Street executives. In light of the news, The Grayzone is republishing this December 2017 report by Hamzah Raza investigating Harris’ support for Israel.)

As the second black female senator in American history, Kamala Harris has been a pioneer in American politics. Many considered her to be a serious contender for the Democratic presidential nomination in 2020.

Harris was even branded by the New York Times as a “‘Top Cop’ in the era of Black Lives Matter,” a tip of the hat to the former California attorney general’s progressive politics and support for social justice issues.

But while the senator has been praised as someone who fights racism in the United States, some critics feel she has failed to be consistent in that approach abroad.

On November 20, 2017 Harris met with Israeli Prime Minister Benjamin Netanyahu. In the meeting, Harris ignored the avalanche of officially sanctioned anti-black racism in Israel, turned her back on historic black solidarity with the Palestinian cause, and ignored the human rights demands of Palestinians living under apartheid.

Harris revealed herself as the latest in a long line of “Progressives Except for Palestine,” and one of the most egregious examples given her personal and political background.

Today I met with Senator @KamalaHarris of California. We discussed the potential for deepening cooperation in water management, agriculture, cyber security, and more. I expressed my deep appreciation for America's commitment to Israel's security. 🇮🇱🇺🇸 pic.twitter.com/L5qdcgwWG0

The day before Netanyahu’s meeting with Harris, the Israeli prime minister announced a plan to expel 40,000 non-Jewish African migrants, branding the asylum seekers as “infiltrators” whose existence poses a threat to Israel’s “Jewish character.”

This came after years of anti-black protests in Israel, where politicians across the political spectrum, including those from Netanyahu’s own party, made statements referring to African immigrants as a “cancer” who “emit a bad stench” and are “likely to cause all kinds of diseases.”

In the present day, black intellectuals such as Michelle Alexander, Eddie Glaude, Alice Walker, and Cornel West have all endorsed a movement of Boycott, Divestment, and Sanctions, or BDS, to pressure the state of Israel to comply with international human rights conventions. West has referred to the dire humanitarian crisis in Gaza as “the hood on steroids.”

Black artists such as Snoop Dogg, Future, and Lauryn Hill have refused to perform in Israel, in cooperation with the BDS movement’s call for cultural boycott of Israel.

A week after Harris’ meeting with Netanyahu, Mandla Mandela, the grandson of Nelson Mandela and member of parliament in South Africa, visited occupied Palestine and stated that “Palestinians are being subjected to the worst version of apartheid.”

Mandela then echoed the words of his grandfather: “Our freedom is incomplete without the freedom of the Palestinians.”

At a speech at the American Israel Public Affairs Committee (AIPAC) conference in 2016, Kamala Harris cited her biracial background as her inspiration to support sending tens of billions of dollars in US government aid to the Israeli military.

Yet the Israeli government demands its right to engineer demographic purity through violence, walls, and laws that have forbidden Palestinian residency in certain areas and that even restrict marriages between Palestinian residents of the West Bank and Gaza and Israeli citizens.

Harris’ opportunism mirrors that of another Democratic black senator in Congress, Cory Booker. In December 2016, I attended a town hall with Booker. After the event, a constituent asked the senator about illegal settlements in the West Bank that were destroying his family’s village in Palestine. In response, Booker brought the conversation around to Israel’s “right to defend herself.”

When I asked Booker if he considered Israel to be an apartheid state, he responded “no.”

Booker is one of the leading recipients of pro-Israel cash, which goes a long way toward explaining how he can so shamelessly square his pro-Israel politics with rhetorical support for civil rights in America.

By clasping hands with Netanyahu, Kamala Harris stood against the historical momentum for justice that is even sweeping through the halls of Congress.

In June 2017, 35 members of Congress wrote a letter in support of Issa Amro, an activist from the occupied city of Hebron who has been lauded as the Palestinian Gandhi for his nonviolent approach to confronting Israeli occupation.

Israel’s occupation authorities had put Amro on trial for 18 trumped-up charges, ranging from “insulting a soldier” to “assault.” Amnesty International has stated that “the deluge of charges against Issa Amro do not stand up to any scrutiny,” describing the charges as “baseless and politically motivated.”

In the letter, the 35 House Democrats defended Amro’s right to peacefully protest.

On November 14, 2017, 10 House Democrats co-sponsored the Promoting Human Rights by Ending Military Detention of Palestinian Children Act, which requires the secretary of state to annually certify that no American tax dollars given in the form of military aid to Israel are used to “support military detention, interrogation, abuse, or ill-treatment of Palestinian children.”

In an unprecedented move on November 29, 2017, 10 Democratic senators wrote a letter to Benjamin Netanyahu urging him to put a halt to the Israeli government’s planned demolition of the Palestinian village of Susiya, in order to create yet another illegal settlement. Cory Booker and Kamala Harris did not sign the letter.

As activists, intellectuals, entertainers, and progressive forces within the Democratic Party began to advocate for Palestinians living under occupation, Harris remains a prisoner of her own opportunism.

Desperate to remain in good standing with the powerful pro-Israel lobby, Harris has attempted to reconcile her progressive politics at home with her support for an apartheid regime that is responsible for racism and violence against communities of color abroad.